Sun
26 Oct 2014
With the clocks going back and darker nights upon us, many photographers will start thinking about taking photographs of the night sky. It can seem like a daunting subject, perhaps because it requires settings that mean switching your camera into full manual mode; but in truth the sky is a simple subject. 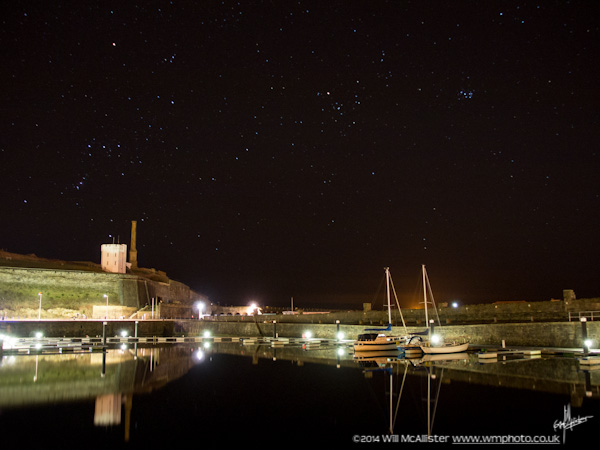 Orion, the Hyades and Pleiades above Whitehaven harbour
It doesn't matter where you are in the world, or when you decide to photograph the stars, they are the same brightness and the sky is black, as always; so what works in Australia in August will work just the same in Scotland in February. For this reason any astrophotography guide can simply tell you how a particular shot was taken, and you can go out and try the same settings and take a very similar looking photo.

In case you're wondering why do this in winter when it's so cold out at night, the answer is that (at the latitude of the UK at least) the sky just doesn't get dark enough for long enough during summer. You can still do astrophotography in summer, although close to midsummer's day it won't get dark enough for too many stars to appear and for the rest of summer, with the clocks having gone forward, you'll have only a narrow window at about one in the morning to take night-sky photos.

There are a few minimum requirements to get decent photos of the stars. It's not something that can be done with a point and shoot or camera phone (unless you have a telescope and are actually photographing through the eyepiece but I'm talking more about photographs like the one above of a sky full of stars). Those types of camera are designed to be fool-proof for use during the day, taking photos of common subjects and often lack the features you need to take control of how the photograph will be taken. So I'll run through the bare minimum requirements of your camera and for other equipment below, as well as some things which you don't absolutely need but will benefit from.

Things your camera needs to be capable of

Setting the aperture, ISO and shutter speed yourself (full manual mode); no camera's automatic mode will be able to make sense of an almost pure black image, you have to set the exposure yourself.

Gear you can't do this without

A tripod; you absolutely have to keep the camera perfectly still for the length of the exposure, which could be minutes long, you could just about do this without a tripod if you have a surface to place the camera on, but even the cheapest tripod will do a better job than this.

Things your camera would be best to be capable of Live-view; a live view screen can make composing the shot much easier. You won't be able to see the stars on your screen but you will be able to see the foreground if it is lit up (or use a torch to illuminate it while compositing the shot) which will help you judge whether you have the part of the sky you wanted in the frame.

A mirror-lock-up feature; (if your camera has live view then putting it into live-view will lock the mirror up); this is only applicable to SLR cameras which have a mirror that directs light up into the viewfinder, the mirror has to flick up out of the way for the exposure and this can cause vibration. Mirror-lock-up will keep the mirror up at all times so it doesn't have to move when you fire the shutter, or alternatively it will flick the mirror up when you fire the shutter and wait a set time before the exposure actually begins, much like a self-timer (although it will mean you can't look through the viewfinder).

A coverable viewfinder; the viewfinder on an SLR (this isn't relevant for other types of camera) can sometimes let a small amount of light leak into the camera. It's not something I've ever really seen ruining a photo but the less interference from other light the better so if your camera has a small shutter than can be flicked over the viewfinder or comes with a separate viewfinder cover then use that.

A lens with a distance scale so you can easily focus on infinity in the dark. You can't use autofocus to focus on the stars, they're just too small.

A torch or head-torch with a red coating (or you can use cellophane) so you can see without spoiling your night-adapted vision.

A star atlas, planisphere, observing guidebook or star atlas app on your phone, to help you find items of interest.

A wired or wireless remote shutter release, if your camera will accept one, if not then you're stuck with the self-timer but using a release is much easier.

A flashgun to illuminate the foreground, or if you have a torch as listed above you can remove the red coating to use it for light-painting.

A pair of gloves to keep your hands warm while using your camera on the cold nights. I prefer to use a pair of lightweight climbing gloves such as the ones pictured, which leave you with enough dexterity to operate the camera controls without removing them, I can also put a pair of thick mittens over them on especially cold nights.

How to take a photo like the one I took.


Simply copying what I did makes it really easy for you to get similar results. I used some of the equipment on the 'might want' list and you might find that you can't copy what I did exactly. If you're able to achieve this and want to know more then I'll be posting a second part with more of the theory of astrophotography; also if you are unable to copy me because you can't match exactly my settings then reading part two to learn a little more about what you're doing will help you to overcome this.